Don’t ask me how long I stared at this:

I still can’t believe my book is in the top spot in the entire store!

Thank you, thank you, THANK YOU to everyone who made it happen! I’m so glad to see this series out there and I hope readers will like Harrington Pack at least half as much as I do.

Today is the day of LMH’s general release! Below you have links to all the stores the book is available now, as well as a few excerpts of some early reviews: 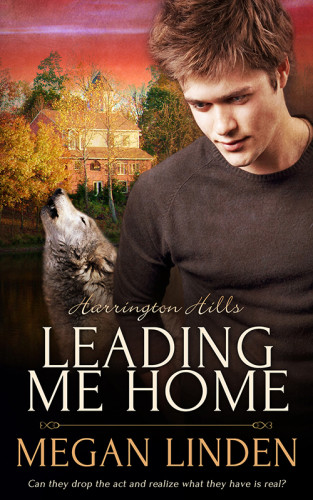 What are people saying?

5/5 (exceptional) (…) This novella has it all – friendship, romance, it has some hot scenes without being gratuitous, and it has definitely left me wanting more. Absolutely adored this book and I’m looking forward to returning to Harrington Hills as soon as I can. Highly recommended.
(Archaeolibrarian – I Dig Good Books)

4* (…) Leading Me Home, is a charming best friends story with the addition of werewolves, that, by the end of it, had me snuggling my teddy bear (in a good homey, not purvey way). The sexual tension between Kevin and Taylor is palpable, well written, and easy flowing with just enough, will they won’t they hooks to keep me reading.
(Sinfully Gay Romance Book Reviews)

5* (…) I highly recommend this book. If you love a good werewolf romance then I guarantee you will like this.
(Inked Rainbow Reads)

(…) This was a love story. Not a suspenseful shifter story of villains and predators. It was about two wolves learning to love each other. About allowing yourself to want things and accepting it when you get it. It’s a story of family, strength, and understanding.
(Diverse Reader)

As of today, Leading Me Home, the first book in Harrington Hills series, is available for Early Download at Pride Publishing website HERE.

You may also pre-order Leading Me Home on Amazon here: US | UK | DE | CA. The general release date is February 16th.

Two weeks into his unemployment, Kevin was yet to regret being fired. His sleep
schedule was finally somewhat stable and he enjoyed being at home every night, where his
main task was to catch up on all the shows he’d missed when he was tending the bar.
He was about to reach for the last slice of leftover pizza when he heard knocking on the
door. The familiar signal—two quick knocks followed by two more after a short pause—
meant Kevin already knew who was outside.
“Everything’s all right?” he asked as he opened the door and let Taylor in. They’d lived
next to each other for over a year and a half now, and they regularly dropped by each other’s
places at various hours of the day, but five to midnight was pretty late, even for them.
“Aren’t you supposed to be buried under the deadlines?”
“Two projects down, one to go.” Taylor flopped down onto the couch and grabbed the
last slice of pizza. “It’s cold,” he said, scrunching his nose, but that didn’t stop him from
taking a bite.
“No one forces you to eat it.” Kevin rolled his eyes and sat down in his place on the
couch. “What’s up? Deadline jitters?” He’d witnessed it happen countless of times by now.
There was always a point when the stress of running time hinged on the threshold of a
nervous breakdown and Taylor’s manic energy had to get out somehow. The fastest way to
deal with it would be to change and run as a wolf, but they were living in the middle of a city
not really known for its wolf population, so that option was rarely on the table.
“I got a call from home.” Taylor burrowed deeper into the couch cushions and Kevin
was sure that even if he weren’t a werewolf, he would be able to sense Taylor’s unease.
“Mom A has informed me that if I come to the wedding alone, she will stage an
intervention—in the form of presenting me to all eligible bachelors from our pack.”
Kevin told himself that the sudden roll in his stomach came from too much pizza and a
reaction to Taylor’s stress. It was most certainly not from anything even remotely close to
jealousy at the thought of a bunch of men fighting for Taylor’s attention. He put his feet on
the coffee table slowly. “Isn’t she going to be too busy with the wedding?”
Taylor finished chewing another bite before speaking again. “She’ll never be too busy to
try to bully me into dating.”
“Lovely,” Kevin muttered. He knew she was both Taylor’s mom and his pack’s Alpha,
but there should be some limits.
“I need to find someone to go with me.” Taylor stared at the ceiling. “Who do we know
that could do this?”
Kevin shook his head. “Stop it. It’s insane.”
“Most of my friends are taken, damn it,” Taylor continued as if he hadn’t heard him
and Kevin wondered if there was even any point in trying to reason with the crazy person
his best friend obviously was.
“You don’t need a date,” he tried one more time.
“Yes, I do. You don’t know my mother.”
Kevin sighed. “Listen, I get that you want to make your mother happy. She’s your
mom. She’s your Alpha. I get it. But you don’t have to do everything she wants you to do.”
He’d heard a lot of stories about Taylor’s family and pack, and they all seemed nice. It was
obvious Taylor cared about them. But sometimes it seemed like he didn’t see anything else.
“It’s just a wedding. You’re allowed to go alone.”
“I don’t want to go alone if I have to endure my mother’s terrible attempts at setting me
up.” Taylor winced. “She tried once, when I was in high school. Let’s just say it didn’t end up
well.”
“You’re not in high school anymore!”
Taylor shrugged. “I still don’t want to risk it.” Then he sat up straight. “Wait, you’re
free! You can come with me! That’s it, that’s the solution.”
Kevin gaped at him for a moment, frozen in place. What the hell?

The book is available from Pride Publishing HERE.

The official premiere is still a few days away (Early Download from Pride Publishing website comes live this Tuesday), but you can already pre-order – just click HERE and the link will take you to the store.

You can also pre-order Leading Me Home on Amazon here: US | UK | DE | CA

But remember, the book goes live on Amazon  on February 16th!  If you want to get to know Kevin and Taylor before that, head to the Pride Publishing website and purchase from there.

I’m hearing good things from people who got ARCs of the book (thank you!) and the positive feedback definitely helps as I’m working on editing the draft of Book 2 of the series. I like spending time with the Harrington Pack a lot and I hope you will, too!

If you looked around closely enough, you might have seen a mention of a new series of mine, Harrington Hills. It’s paranormal, mixing werewolves with small town romance, simply because I couldn’t resist werewolves for long!

It’s also my first book published by Pride Publishing, a part of the Totally Entwined Group, which I’m really excited about.

But let me tell you more about the book:

The book comes out on January 19th from Pride Publishing (available on the publisher’s website) and the general release is on February 16th.