Serve & Protect comes out in a week!
I’m very excited and I can’t wait to hear what you think about this book. And since the clock is ticking and May 29th gets closer and closer, I’m sharing the excerpt below. 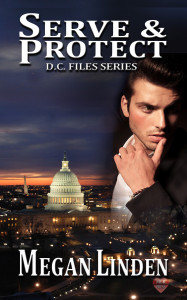 What happens when you fall in love in the heart of politics?

Sam Daniels’ life turns upside down when he meets an amazing guy and gets a job offer he can’t refuse almost at the same time. Working in politics and sustaining any kind of personal life is never easy, but when you’re running a campaign to elect the first woman to the office of the President of the United States, it may become nearly impossible.
Blake Morin, after spending years as a SEAL, lives a quiet life with his daughter and he’s fine with that. He can’t deny the attraction between him and Sam, but is he ready to enter the world he used to avoid?

Sam slid down in his booth at Seagal’s, the back of his neck resting on the top of the seat. He breathed out in relief and tried to will his muscles to relax just a little bit. The beer was getting warmer on the table, but he didn’t care. He just needed a break after a long day, that was it. Even warm beer couldn’t spoil the fact that he could sit here and do nothing for half an hour or so. Fifteen minutes, at the least.
Seagal’s was the only place close to his office without a TV, and Sam loved them for it. He couldn’t rest when there was news playing in the background.
“Bad day?” someone asked, and Sam looked up to see a tall guy standing next to the table with a beer in his hand.
“You know what they say.” Sam tilted his head and gestured for the man to sit down. The place was busy, so there weren’t a lot of empty chairs around, and Sam wasn’t an asshole. Besides, the guy was really hot—tall, with short, light brown hair and eyes Sam didn’t want to look away from. He straightened in his seat, trying to seem less like he had been chewed on by a dog. “The only easy day was yesterday.”
The guy sat down and raised his eyebrows. “SEALs say that. Did you serve?”
“Not in the military, no.” Sam shook his head. “I work in a senator’s office. You can say that we don’t have many easy todays either. Did you serve?”
“In the military, yes.” The corners of the guy’s lips turned up a little and Sam relaxed, smiling back. “SEAL, actually. Blake Morin.”
Sam shook the extended hand and there was maybe a two second delay when they just looked at each other. Maybe. “Sam Daniels.” He felt awake now, an adrenaline rush at the spark of interest was enough to wake him up.
“We don’t need to talk if you’re not up for it,” Blake offered, but Sam shook his head.
“I’m fine. It’s just one of those days that went on too long. I need to recharge before going home.” It was counter-intuitive for some people, but Blake nodded like he got it.
“At least it’s Friday tomorrow,” he said. “Or do you guys work around the clock?”
“We do when we have to. Not this weekend, though. It’s just…” Sam paused and shrugged, looking at the bottle he was holding, the label scratched at the corner.
“A bad day,” Blake finished for him and sat back in his seat, taking a sip of his beer.
Sam nodded. More like a string of bad days. He’d been feeling anxious and off balance for weeks now, and he figured that was the reason he found himself telling this complete stranger more than he normally would. More than the guy wanted to know, probably.
“My boss is retiring tomorrow and it’s…weird.” Sam picked at the label. “We’ve been working together pretty much since I came to D.C. It was easy in a way those constants in life are, you know?” He looked up and Blake nodded. “Now it ends, and I’m not sure what I’m going to do next.” He’d had a few months to come up with something, and he still had nothing.
“You don’t have to have the answer ready,” Blake pointed out.
Sam couldn’t help being a little jealous of how calm he sounded. Like it’s that easy. He shrugged. “Yeah, I know—”
“No, listen,” Blake interrupted. “Listen, I get it. Transition like that, it’s always hard, even if you do know what’s next.” He leaned forward, rested his elbows against the table, and caught Sam’s gaze. “When I signed my transfer papers, I knew what I was doing, I knew where I was going, but it still felt shitty at the beginning. It took me a while to find my footing again.”
Sam took a drink from his beer. Maybe it shouldn’t work, coming from a complete stranger, but he felt the tension in his shoulders easing up a little.
“Thanks,” he said, and then smirked, wanting to lighten up the mood. “I bet you didn’t expect to be giving pep talks when you came looking for a seat.”
“Maybe I didn’t come looking for a seat.” Blake smiled, showing his teeth, and Sam fixated on his lips for a second before the words registered. There was a surge of heat in his stomach that he hadn’t felt in far too long.
“Wow,” he murmured, hoping he wasn’t bright red. He didn’t have a poker face when it came to his personal life.
Blake took a sip of his beer, eyes not leaving Sam’s. “Too forward?”
“No!” Sam protested quickly. God, no. “No, just…surprising. Good surprise, though.”
Blake smiled again, softer this time, and sat back in the seat. “It’s been a long time since I did this.”
Sam felt warm all over. “Probably smart. It’s risky, after all, to come on to a guy in a bar.”
“I’m pretty sure I could take you.” Blake smirked.
Sam raised his eyebrows and felt the laughter escaping him.
Blake snorted. “I meant in a fight.”
“I’m sure you could take me, too.” Sam nodded. “In a fight.”
Blake’s gaze wandered to his lips for a moment and Sam shifted in his seat. Getting an erection in a bar is a bad, bad idea, he told himself as Blake looked him in the eye.
“Also, I wasn’t sure I was going to hit on you before I sat down. We could have just had a nice, easy conversation.”
“Are you sure now?” Sam asked. He forgot he’d been tired. He hadn’t felt this awake in weeks.
Blake nodded and smiled. “Yes. I’m sure now.”
Sam smiled back. “Good.”