Trust & Confidence comes out in a week, so – as usual – it’s time for an excerpt! 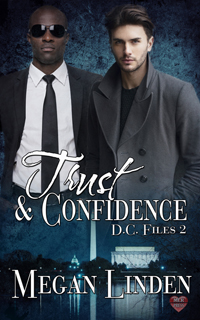 It’s been ten years, they are supposed to be over this.

Michael Lorne has worked for years to be where he is right now – on a protection detail for the White House Chief of Staff. But then his whole world gets shaken up the moment he meets the one person he thought he would never see again. His childhood best friend, his first love, the one who got away.
After a stint of working on presidential campaign, Adam Davis is back where he belongs – writing for his political commentary blog, DC College. Life is good. He’s comfortable. He’s doing what he loves. He’s… not prepared to see Michael walking back into his life.
Nothing can be the same now that they have met, but what will happen next? Is their past truly behind them or are there some things that were never meant to end?

*The book is the second one in D.C. Files series and some of the characters we’ve met in the first book show up again. As such, it is a continuation, but Trust & Confidence can also be read as a stand-alone.

Trust & Confidence comes out on November 13th.
If you’re interested in the first book in the series, Serve & Protect, click HERE.