I’m so, so happy to say that my short story, Running Off the Edge, will be published by MLR Press on February 7th, right at the start of the 2014 Winter Olympics! 😀 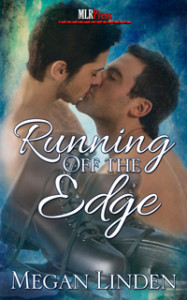 After the knee injury, Liam O’Connor, the former gold medalist, is no longer able to compete at the Olympics. He’s in Sochi as an assistant coach for another male figure skater and hopes to avoid Eric Lanney as much as possible.
Meanwhile Eric is back to compete for gold in pair skating, but is that the only thing that will be important to him? Maybe when the former lovers meet again in Russia, they will both learn that a gold medal isn’t the greatest prize you can win at the Winter Olympics.

I’m so, so grateful to Kris Jacen, my editor, and everyone at MLR Press, who took a chance on a new author. Thank you all!
And thanks to Lex Valentine for my lovely cover art. 🙂